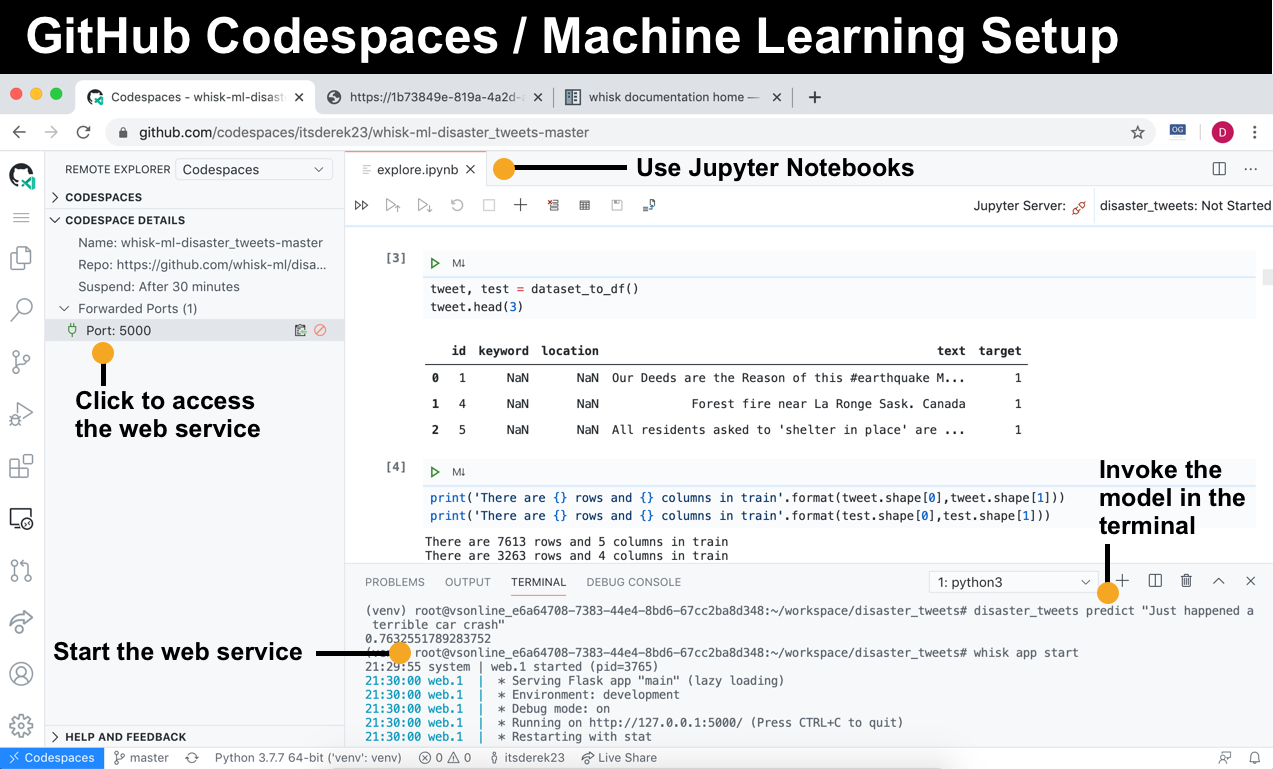 Give potential contributors to your ML project a smooth onramp by providing a pre-configured IDE environment.

Attempting to contribute to an open-source machine learning project requires a leap-of-faith. Is there a list of dependencies? Where is the training data? Is there a pre-trained model? Should I just bail and watch Lego Masters instead? It can take hours to hotwire an ML project.

This is why I was very excited to hear about the BETA release of GitHub Codespaces at Satellite 2020. With Codespaces, contributors can spin up a ready-to-go GitHub project-specific dev environment in the cloud. In this post, I’ll show how to give potential contributors a graceful start by configuring Codespaces for an ML project.

Doesn’t Google Colab already do this?

Online notebook services like Google Colab provide a Jupyter notebook environment in the cloud. These are great for proof-of-concepts, but a notebook-only environment falls down when you move beyond exploration for several reasons:

With GitHub Codespaces, you have both a Jupyter notebook environment and a full IDE experience (code editor & terminal access). You don’t have to resort to ugly workarounds for the above issues.

It’s easy to run an ML project within Codespaces when it has a solid structure. The project structure in this tutorial was generated using whisk, an open-source ML project framework that makes collaboration, reproducibility, and deployment “just work”. I’ve been developing whisk with Adam Barnhard of Booklet.ai.

whisk generates a Pythonic project structure that makes it easy to share code across notebooks, version control data with DVC, distribute a model as a Python package, and spin up an HTTP web service for the model. whisk extends many of the ideas put forth in Cookiecutter Data Science. Because a whisk ML project behaves just like a Python project, it’s easy to spin up a Codespaces environment.

The ML project - Real or Not? NLP with Disaster Tweets

I’ll be referencing Real or Not? NLP with Disaster Tweets, an ML project that trains a Tensorflow-backed Keras model to detect if a tweet is about a legitimate disaster. Besides the raw trained model, the project contains:

Outside of the notebook, these pieces require a full development environment, not just a notebook environment.

Here’s why these settings are used:

View the devcontainer.json reference on the Visual Studio website for a list of all available configuration settings.

Running the project inside Codespaces

We’re ready to start. From the GitHub project, click the “Code” button and create a new codespace. After a couple of minutes the project environment will be created. 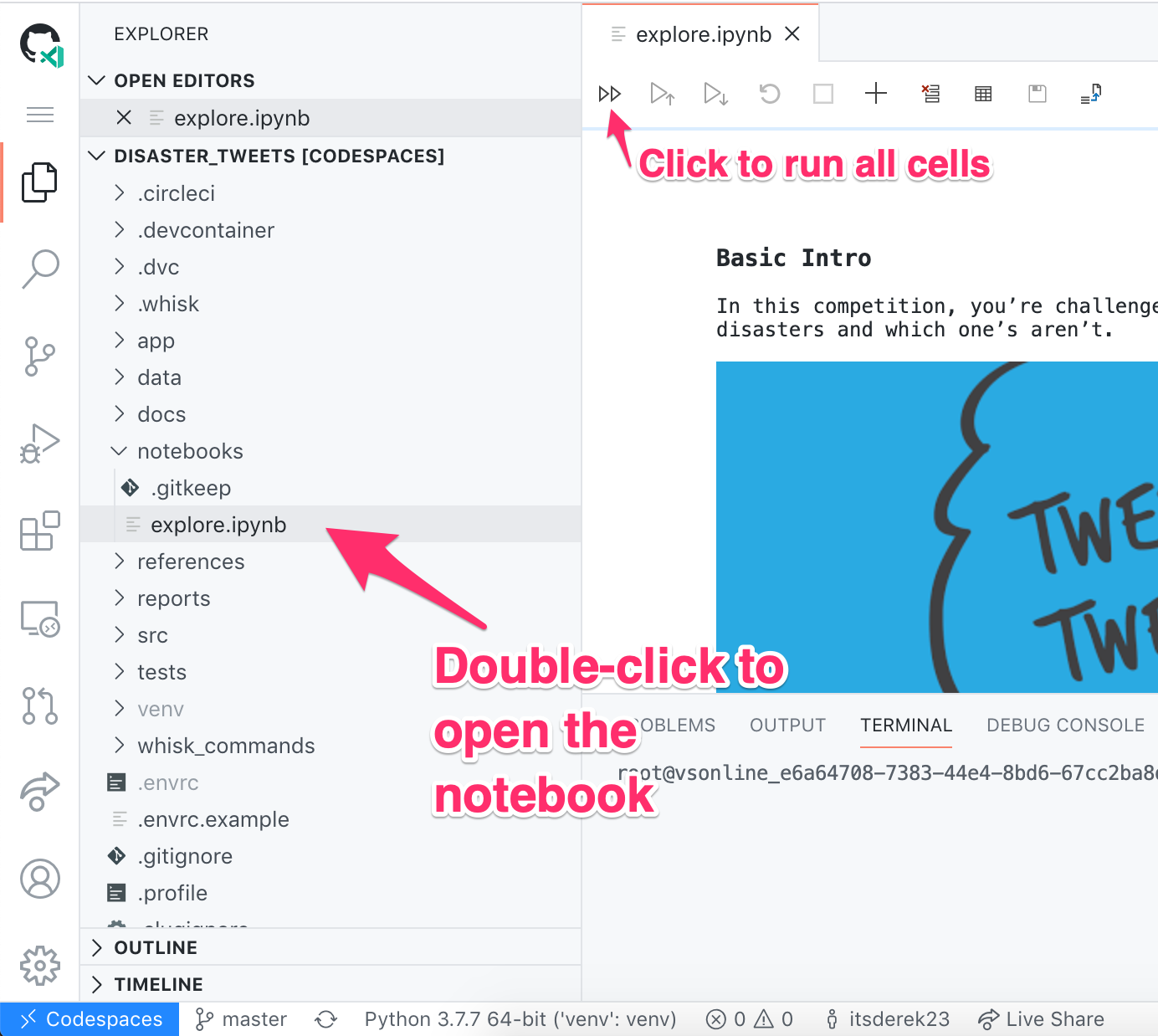 In the sidebar explorer, double-click on “notebooks > explore.ipynb”. This loads the iPython notebook and initializes the Python extension. Click the fast-forward button to execute all of the cells.

Open a terminal session from the sidebar:

whisk sets up a CLI to invoke the model. You can run this from the command line:

In the above example, the model believes that this is most likely a real disaster.

Use the web service

whisk also sets up a Flask web service to invoke the model. You can use the web service from Codespaces (mind blown). To start the web app, run whisk app start inside the terminal. To view the web app in your browser, click the remote explorer icon and “Port 5000” under forwarded ports:

You can even view web apps inside GitHub Codespaces.

See the pipeline for training the model

You might be curious: how is model is trained? What files does the training stage generate? As this project uses DVC to version control the training pipeline it’s easy to inspect the training flow from the terminal.

From the terminal you can view the stages in the pipeline with dvc pipeline show:

DVC shows that there are three stages and that the train stage depends on two download stages.

You can view the outputs from all stages with the -o flag:

No need to run training

One of the great things about using DVC to version control the training pipeline is you only need to re-run the training stage if any of the stage dependencies aren’t up-to-date (ex: you modify the training script or raw training data). Training takes about 20 minutes in this project. With the dvc repro command we know that training does not need to be re-run as nothing has changed. This delivers a much faster bootstrapping experience:

There are some things I’d like to improve about this setup in the future:

With a whisk-structure ML project and a devcontainer.json file, you’ve created an easy onramp for potential contributors. Codespaces is a good option when your project has evolved beyond the proof-of-concept, single notebook stage of an ML project.